How do you make sure you end up with a trusting, trainable horse? You start right. From the very beginning.

I work with other people’s problem horses a lot, and I think because of this I have a distorted view of horses and their state of mind. I hope. Over half of the horses I work with are some kind of “problem horses” ie. the horse does something else than the owner wants it to.

I see some horses who don’t know what the owner wants them to do. Either they’ve never been trained properly or they’ve learned to do something else over time. Easily fixed, horses are easy to train and learn quickly. Example: A horse doesn’t respond to the rider’s leg. You begin again, reward a little try and gradually increase your demands. Being sure never to nag with your leg again.

I see some horses who don’t want to do what the owner wants them to do. Pretty easy to fix: you only need to figure out how to get the horse to want to do the same thing the owner does. Example: A horse doesn’t want to go into the trailer. You add something the horse wants and train him that whenever he steps towards the trailer, he gets that something. Gradually increase your demands.

(Yes, a lot of horses are nervous around trailers, and with good reason. Now and again, though, I’m asked to see one who genuinely just would rather stay out of the trailer than inside it. Lovely and easy to fix.)

I see some horses who can’t physically do what the owner wants them to do. Usually the vet can help: if you have a horse who otherwise does what you ask but for some reason won’t strike a right canter or just will not trot in one direction when the other is fine, and you try stretching the horse, rewarding the right response and still – after a while – it doesn’t improve, the horse must again be checked by a vet. Kissing spines are terribly common in riding horses, as are ulcers and joint problems too just to name a few.

But to come to the point: I meet a lot of horses who are a bit tense around people. That in itself may not seem like a big deal to the owner, but it is to the horse. Imagine having to work with someone who you’re a bit afraid of. Even for an hour or two every day. You may become a little more tense every day, and if you’re a horse, tension brings with it some problems. For the horse, but also for the owner.

A horse that is tense when being handled or ridden can be considered a difficult horse. If the baseline tension is high, the horse reacts oddly. He may seem unable to focus on work or the handler. He may react too slowly or too little – or hugely, quite out of proportion to small changes in the environment. And at the end of the scale, he may buck, bolt or refuse to let the rider get on – or he may be impossible to shoe, vaccinate or catch in the field. Sometimes it’s all due to being tense around people. Sometimes the reason for the tension goes way back to the first hours or days in the foal’s life.

The foal in the above picture is three weeks old and was touched for the first time by a human the previous day. Here he’s getting to know our vet.

The good news is that at some point – usually at the latest around the two week mark, some earlier, some later – the foal will begin to itch. If you have been able to manage the environment well enough so that you haven’t had to catch the foal and try to lead it somewhere (with it possibly learning that people are ever so slightly frightening), now you’ve got the chance of a lifetime. It may take you a few minutes and some ingenuity to get close enough to the foal to be able to scratch him, but once you do, you’re set. It takes one minute or twenty seconds to teach the foal that people are the best thing ever. That memory will carry a long way once you start training your foal. (I suggest the next thing you train is how to move the foal out of your lap.)

Is it really that simple? Yes. No need to be there at birth, no need for imprint training (which brings with it some serious problems, see the list of studies at the bottom of the page) or catching the foal at a day old, putting a halter on (and not being able to catch the foal again to remove the halter, I have seen several of those) – nor, as I’ve even heard, carrying the foal around so that it learns the human is stronger than he is… 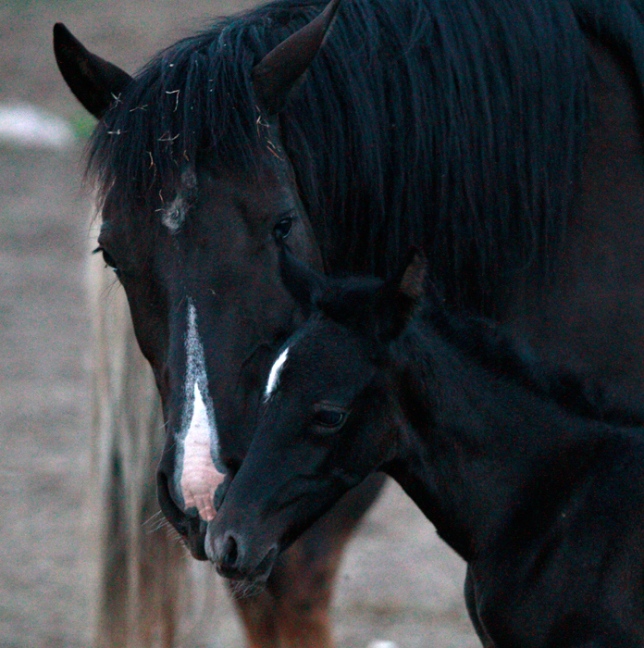 Some studies on foal behaviour:

http://www.ncbi.nlm.nih.gov/pubmed/17111402 (Even when only helped to suckle, foals avoid humans later on)

Posted by Minna Tallberg on August 7, 2014 in Animal Training, Horses